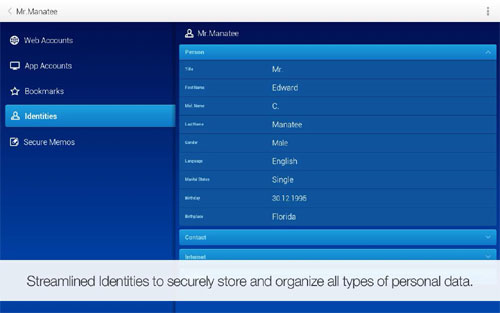 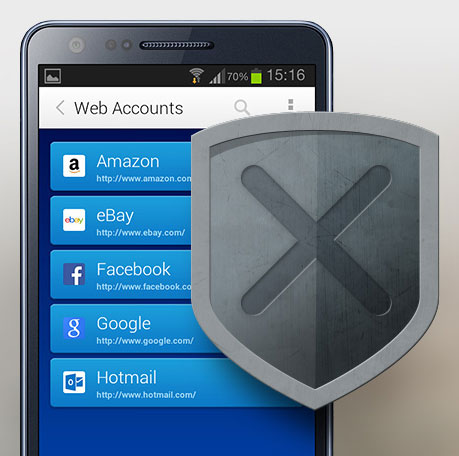 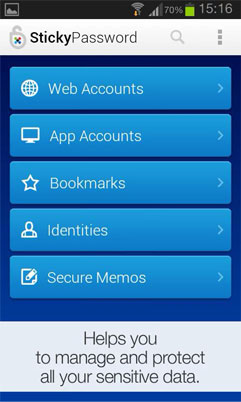 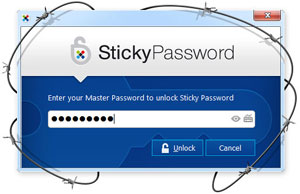 Sticky Password is a powerful yet simple free/premium password manager and secure digital vault for your phones and tablets as well as other desktop and mobile devices.

Hi, I have a question about Sticky Password Pro

Manage passwords easily and securely and access them on the fly when and where you need them. Sticky Password enables you to login into any website automatically.

Password protection is about trust and the cloud based solutions especially. That is why Sticky Password has been built by security industry leading team that brought and maintains security in check for some of the largest and most popular Antivirus solutions. Sticky Password manager for Android brings some revolutionary ideas, along with unquestionable security for all your sensitive data – which you can synchronize simply and securely through our cloud servers or via local Wi-Fi to any device of your choosing.

Further, Sticky Password Pro has a password generator which can provide a suitably-randomized string of gibberish according to an assortment of rules: length, characters included, and so on.

Accounts can be easily searched in Sticky Password’s main window, simply by typing in some portion of either the login or the site. Those who prefer a less ad-hoc method will be pleased with Sticky Password’s ability to organize and group your data, so you can sort logins and passwords into work, personal, etc, groups.

Sticky Password offers a new interface that makes it easier to move between different categories of stored data. It also adds new features, such as bookmark management, and the ability to export subsets of passwords for sharing—for example, a set of passwords associated with accounts at your job can be exported for coworkers.

Another helpful feature is the ability to exclude specific sites. While Sticky Password works seamlessly most of the time, there are occasional places where an odd interface or non-standard practices cause it to break, which can cause frustration. The ability to do site-by-site exclusion is a useful bit of new functionality.

In general, Sticky Password Pro has maintained a rapid schedule of bug fixes and compatibility updates. However, during the course of testing for this review, I experienced two severe bugs. Both were resolved, but they need to be mentioned. First, I was experiencing constant Firefox crashes when I upgraded to v.18. Sticky Password was listed as compatible, so it took a while before I found out it was the culprit, rendering Firefox effectively unusable. Second, while testing the bookmark feature, my computer would spike CPU usage and hang, forcing me to reboot. This turned out to be related to an issue with Opera passwords, which required me to purge my Opera info. The Firefox bug is fixed in the current version of Sticky Password; the Opera bug remains a known, albeit rare, issue.

I’ve been using Sticky Password for years with no issues, so it’s not generally unstable or buggy, and I am not going to stop using it unless I start seeing issues arise a lot more frequently. It’s an excellent product that, if used regularly to generate and manage unique passwords for each site, can reduce the risks of having a single hacked server expose multiple accounts.

Be the first to review “Sticky Password Pro” Cancel reply